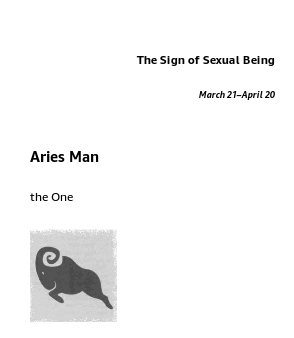 If an illustration were to accompany the definition of man in the dictionary, it would no doubt look more like Aries than any other guy in the zodiac.

He is astrology's prototypical chap—the model-A male—and as such he embodies the strictest utter essence of his sex: Whether eternally boyish or painfully macho, Aries is an exploration of masculinity

in its purest form—physically, emotionally, and psychologically. He is most self-assured and unapologetic in attitude and behavior, comfortable in his skin and fearless in his ambitions. He lives life as if he were the only guy on the planet, feeling entitled to take freely from it what he wants, oblivious to obstacles or the admonitions of others. Forthright to a fault, he possesses a conquering spirit, thriving on pursuit in his professional as well as private life. He oozes virility, literally generating an aromatic heat, making no bones about express-ing romantic or erotic interest Beneath his typically clean-cut appearance lies a hormon-ally raging animal ever ready to take the sexual lead, yet he oft feels obliged to subdue this self-perceived bestial nature, hoping to achieve a higher, spiritual connection with a woman and be her consummate knight in shining armor. In the end, he should come to realize that pure intentions and prurient desire needn't be mu-tually exclusive.

When sexually engaged with .... Astrology might have some answers base on your Birth Data 👉 Just Fill up this form , You can ask me 1 free question